Insomnia is one of the most common reasons to see a doctor in the United States. 30%-35% of adults have brief symptoms of insomnia, 15%-20% have short-term insomnia (lasting less than 3 months), and 10% have chronic insomnia, which occurs at least 3 times per week for at least 3 months. One of the common prescriptions is a pharmaceutical sleep aid, which is normally recommended for a brief period (less than a month). Doctors often recommend sleep medications during periods of stress, such as divorce or moving, which can prevent a patient from developing a pattern of poor sleep. But if there's a cause of insomnia that hasn't been addressed, patients may still have trouble sleeping and can quickly become physically and/or psychologically addicted.

Sleeping pills are one of the most commonly used medications in the United States. According to the Centers for Disease Control and Prevention:

According to the Substance Abuse and Mental Health Services Administration, emergency room (ER) visits due to an overdose of zolpidem (the active ingredient in Ambien and other prescription sleep aids), increased from 21,824 in 2005 and 2006 to 42,274 in 2009 and 2010. That number doesn't include suicide attempts, non-prescription uses, or bad reactions to correct doses.

The increase in sleeping pill-related hospitalization is likely due to the fact that the use of sleeping pills is on the rise. Use of nonbenzodiazepine (the group of drugs that zolpidem belongs to) grew 30 times from 1994 to 2007, and that's 5 times faster than the growth of insomnia diagnoses over the same period.

The Different Types of Sleeping Pills

Another type of medication is benzodiazepines, which aren't sleep aids but are used as anti-anxiety medications. Some physicians prescribe them for their patients to help them sleep. Some of the most common are Xanax, Valium, Klonopin, and Ativan. These drugs also bind to GABA receptors but are more addictive than z-drugs.

Drugs That Alter the Sleep-Wake Cycle

Over-the-counter sleep aids (not prescribed by a doctor that you can buy at a store) will cause drowsiness. And some people use medications that aren't made for sleep but that cause drowsiness as a side effect, such as cold or allergy medications. Advil PM, Nytol, Sominex, ZzzQuil, Tylenol PM all contain diphenhydramine. Their packaging claims it to be non-habit forming, yet there's research that concludes that it enhances the release of dopamine in the brain, producing an effect similar to cocaine. And there's a risk of psychological addiction.

Examples are doxepin (Silenor and generic options) and trazodone. Doxepin is FDA-approved for treating insomnia, but trazodone isn't.

Risks and Side Effects

All sleep medications have side effects which often cause people to feel groggy, less aware, dizzy, or tired the next day, and may also include headaches, muscle aches, constipation, and dry mouth. They can also make sleep apnea worse. There's also evidence that sleeping pills increase the risk for certain cancers, and that people who take them are 4 times more likely to die than those who don't take them.

According to Pennsylvania State University, the risk for falling rises significantly for seniors who use prescription sleep aids. These falls often lead to broken bones and brain injuries.

Side effects specific to the type of medication include:

Parasomnias are unwanted behaviors people engage in while "asleep." This occurs when one part of the sleeper's brain is awake, and the other part is asleep, and the sleeper unwittingly engages in behavior such as eating, texting, driving, walking, and even sex, all with no memory of doing those things. The company making the drug Ambien, Sanofi-Aventis, has been sued due to users saying that they've engaged in all kinds of parasomnias. The attorney for the class action lawsuit referred to Ambien users who engaged in unwanted behaviors as "Ambien zombies." The lawsuit was unsuccessful, but the FDA did require stronger warnings about the risk of "preparing and eating food, making phone calls, or having sex."

There are many well-known stories about Ambien blackouts. One of the most famous involved then-congressman Patrick Kennedy in 2006, who crashed his Mustang into a barrier near Capitol Hill in the middle of the night. He had taken Ambien and anti-nausea medication and told police that he was late for a vote.

The Journal of the American Academy of Psychiatry and the Law detailed the experience of a woman who woke up with a garden axe on her nightstand after taking Ambien the night before with no memory of how it got there. She went through her text messages and found a conversation with her partner where she described hearing voices in the kitchen and seeing moving images out of the corner of her eye, so she went to the tool shed for protection.

A 45-year-old flight attendant from Texas took a couple of Ambien in April 2009 and had drunk wine earlier in the day. She woke up the following morning in jail in her pajamas, barefoot. During the night she had hit three people, including an 18-month-old who suffered severe brain damage, who later recovered miraculously. Instead of a 10-year sentence, she was ordered six months in prison and 10 years of probation.

Also in 2009, Robert Stewart killed eight people and injured two more when he entered Pine Lake Rehab and Nursing Home in Carthage North Carolina. He was after his estranged wife, who survived after hiding in a bathroom. Using the Ambien defense, he received 142-179 years in prison, as opposed to the death penalty.

This has led the FDA to require new warnings on boxes of eszopiclone (Lunesta), zaleplon (Sonata), and zolpidem (Ambien, Ambien CR, Edluar, Intermezzo, and Zolpimist). They explain, "The FDA reviewed 66 cases reported to the FDA Adverse Event Reporting System or found in medical literature, in which patients engaged in activities while they were not fully awake, such as sleepwalking or driving, that resulted in serious injuries or death after taking insomnia medicines eszopiclone, zaleplon, or zolpidem. The 46 reports of non-fatal serious injuries included accidental overdoses, falls, burns, near-drowning, exposure to extreme cold temperatures leading to loss of limb or near death, self-injuries such as gunshot wounds, and apparent suicide attempts. The 20 deaths reported were from carbon monoxide poisoning, drowning, fatal falls, hypothermia, fatal motor vehicle collisions with the patient driving, and apparent suicide."

Drew Fairweather, who draws for the online comic Toothpaste for Dinner has a series of illustrations about the Ambien walrus. Fairweather was an early Ambien user and describes some of his experiences through the comic. 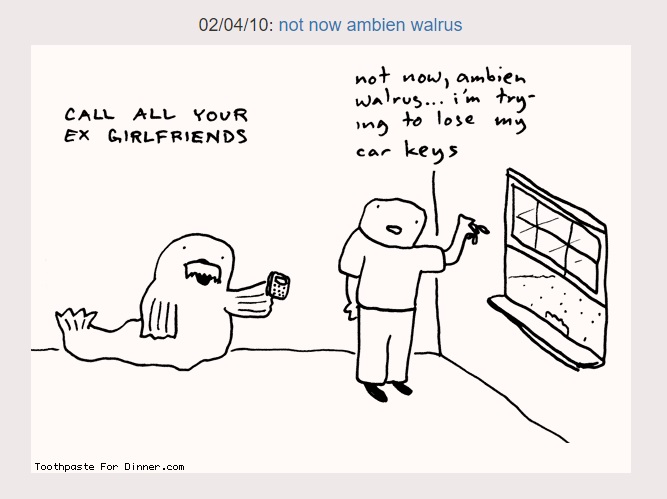 There are a few characteristics that are recognized as risk factors for aberrant medication-taking behaviors (AMTB) due to addiction:

Signs of a Sleeping Pill Addiction

Many people who have developed a sleeping pill addiction don't realize that they're addicted until they try to stop taking the medication. They may have assumed that because their doctor prescribed the pills for them, that they couldn't become addicted, and/or that sleeping pills aren't addictive.

Whenever sedatives are used in a way not prescribed by a doctor, it's abuse. Most sedatives are prescribed to be used for a short period of time as people can become acclimated to the drug. Because of this, users will often take more to get the same effect and will use the drug longer than prescribed because they can no longer get to sleep without it. This is referred to as "rebound insomnia," where their insomnia is worse than when they first started taking the drug.

The symptoms of withdrawal from sedatives are identical for all sedatives, including alcohol:

These symptoms may appear as soon as 4-8 hours after the last dose, and will usually show up within 48 hours, but occasionally not until 7-10 days.

Withdrawal symptoms of z-drugs include:

Severe cases may include:

Those who receive treatment have less disability than those without. For Americans, physicians who specialize in the treatment of addiction can be found in several places:

Other Forms of Misuse and Abuse

High school and college students have used sleeping pills to exacerbate the effects of alcohol or other drugs. Sedatives can also cause hallucinations when users fight the urge to sleep.

Some of these drugs have also been used as "date-rape drugs", such as flunitrazepam (Rohypnol). It's colorless and odorless and therefore not detectable when added to the drink of a potential victim.

Tips for Safer Sleeping Pills Use

Here are a few safety guidelines for sleeping pill medication:

Prescription sleeping aids can be helpful for people with insomnia, but users must be careful to use them for a short period of time.

According to the NIH, taking a sleeping pill will on average get someone to sleep 12 minutes faster, for 11 minutes longer, and doesn't enhance the quality of sleep. Taking this information into consideration along with the risks of parasomnias, withdrawal symptoms, and addiction, it makes sense to talk to a doctor that specializes in sleep medicine to find some other options that may address the cause of your insomnia. 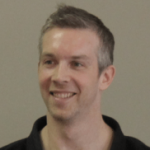 How Sugar Affects Your Sleep